Skip to content
HomeSurviving for 90 Days Part 2-B – How Much Food Do You Need?

For this post, we’re skipping ahead a little. We want folks to start thinking and start planning. Next week’s post will go into greater detail on the different types of long term storage food.

This is where preparing gets challenging. Most of the folks that sell long term storage food get you excited by the number of servings that they include in their price. Anyone who has had company for Thanksgiving knows that serving size is meaningless. Cousin Eddie eats like a horse. Aunt Sal eats like a sparrow. Heck, when the wife and I get a rack of ribs, she eats less than half and I eat the rest.

We’ve got to plan based on how many calories are required, not serving size.

So, how do we know how to do this? Well, our medical community has actually studied this for us. They have come up with information that has determined how many calories a person needs in a day broken down by age and gender, and how active these people are!

So, how do you use this information?

We’ve taken it one step further to figure out how many calories are needed for more than one person, such as a family!

If you take the chart shown above and add a few columns, you will have a sheet that computes your total family daily requirements!

Here is an example of a chart like this filled out. Let’s say for example that you are a family of four, with the husband being 32 years old, the wife 30, with two children, one 4 years old and one 9 years old.

Filling in the numbers of people, you see that you will need between 7000 and 8850 calories per day for your family.

If we take a look at #10 cans of some typical items, we find out that different things produce different calorie counts. 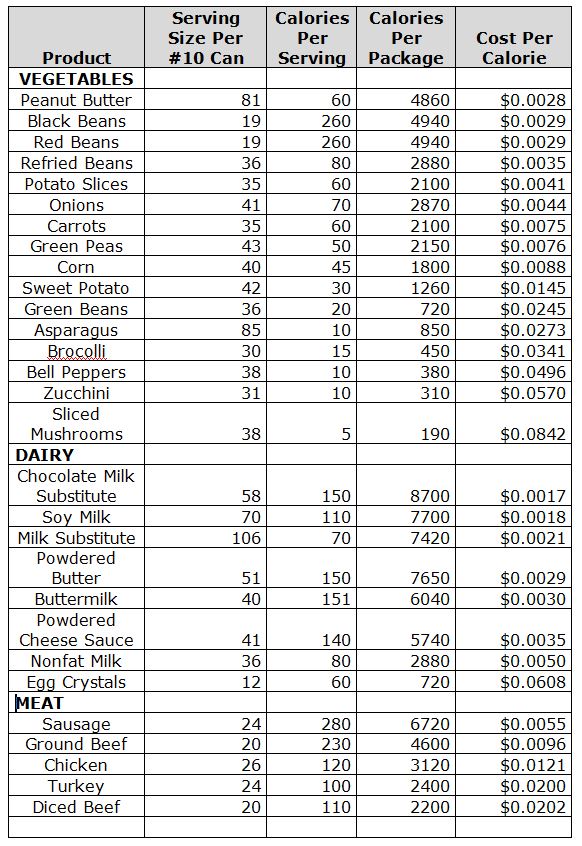 It’s interesting to see that different items provide very different calories per serving and even more importantly cost per calorie.

For those on a budget, you may want to explore recipes that make use of the higher calorie contents (like Red and Black Beans in this example) to be able to create adequate calorie counts with less money spent.

Once you have your basic essential food stuffs on hand, there are certainly other considerations, such as snacks, fruits, etc. These will be covered in a later chapter.

And these are just examples. You can create a spreadsheet like this, input the things you like to eat and/or already have in stock, and see where you need to adjust to create adequate calorie counts.

Now comes the fun part – planning your menus! If we go to a sample calorie count sheet, you’ll see that we took ten #10 cans of vegetables and meat and figured out the calorie count per serving. That chart also computed the number of calories produced by the total of the 10 cans.

Of course this is based on a number of factors that can change. It’s based on you having nothing other than long term storage food. You might have other food options such as MREs, commercial and home canned food. For planning purposes, I’ve worse-cased it.

If you are on a budget, you can certainly adjust out higher calorie food for lower calorie food. Whatever food stuffs that are planning on, you can do the same computations.

The beauty of using a “calculator” for computing your requirements is that you can “play around” with different menu items to increase calorie content and reduce costs.

Let’s see what the lowest costs could be.

We learned very early in our preparing process that the expensive part was meat. Freeze dried and other long term storage meat was very expensive. For example, in our scenario of a family of four, using “real” meat versus TVP meat increases your food storage bill by over $2000 over the 90 days! If there were no other options, it might make you want to become a vegan!

We tried TVP meat. Used in casseroles and stews, it actually isn’t bad tasting! The cost per calorie for TVP meat is far less than “real” meat.

We looked at different options. The first was to mix TVP and real meat on a 50-50 basis. It certainly works out, and cuts your food storage bill by $800 or so.

Another option was to home can meat! We practiced that and found it not only to be fairly easy to do and an incredible cost savings, but it is also very good to eat! Our challenge is to keep it in storage instead of using it and eating it regularly!

A later chapter will discuss home canning of meat.

We can’t state strongly enough that the key to planning for food storage is to first determine how many calories you and your family needs to survive.

Once you’ve figured that out, you need to explore different menus. If you have all the money in the world, you can pretty much replicate your day to day foods via long term food storage. If you are like most of us, you are on a budget, and some menu adjustments will have to be made to maximize caloric input versus cost per calorie.

These spreadsheets will make it easier to compute and adjust different items. In our examples, we only used dehydrated and freeze dried food. You can use these spreadsheets for any kind of food, be it canned goods from the grocery store or any other food. Input the serving and calorie count and you get the results you need.

The strongest recommendation that we can make is to try these menus now, before you have to live on them. There is nothing worse than having to eat things that you can’t stand. Most folks just won’t eat it, or won’t eat enough of it. Calorie intake is critical.

When we were in the Army, there was an old saying when you wrote plans and other instructions. People always referred to a concept that Napoleon used when issuing guidance to his subordinates. He would always have the instructions read to one of his corporals. He figured if they understood it, then everyone else would too. The notion became used in the Army as finding your “Napoleon’s Corporal” before you sent something off.

Well, we had this chapter read by our Napoleon’s Corporal, and we got some feedback that we figured we needed to address. He told us that he had read and understood the “storing by calorie” concept, but wasn’t sold completely on long term storage food. “After all, you are the one that said that commercial canned goods don’t really have an expiration date. Why couldn’t I just buy that?”

He raises a good point, so here is a little better examination of commercial canned food.

We went to Walmart’s web site and got some prices for some of the more common commercial foods that folks might eat. You can see that cost per calorie is very similar to long term storage foods! 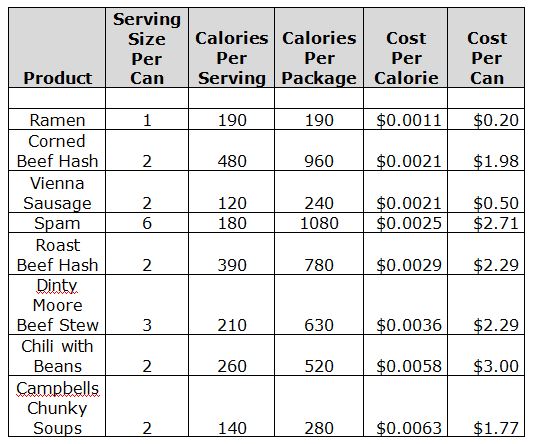 Heck, if you got it on sale it might even be cheaper than that. So far, long term storage food doesn’t have a price advantage.

Let’s look at some other things. Fat content and sodium content generally is incredibly higher in commercial canned foods than in long term storage. We were shocked to look at the labels and see that many of these items had fat as almost 50% of the calories that you got from eating it! The sodium (salt) per serving, not per can was often as much as 30% of your daily allowance.

When we talked about how long commercial canned food lasts, we were talking about how long it is safe to eat. Canned food can last a long time, but it does lose its flavor and nutritional value over time. Freeze dried and dehydrated food doesn’t have this problem.

We have always been adamant about the fact that there is no one single type of food to put in your storage. We have a mix of all of the types (except frozen) because all of them have their advantages and disadvantages. Some commercial canned food can be useful, not only for how quick it is to prepare, but also its ease of transport if you are out and about.